This patch was used in 103 Guards VDV division until 1995, when the division was disbanded. The eagle symbolized the VDV's slogan 'From the Sky to the fight'. Three arrows are the three regiments of 103 division, those are: 317, 350, 357 guards regiments. Fought in Afganistan till the end of 1989. After returning to Soviet Union, based in Belorussia, by Vitebsk city. 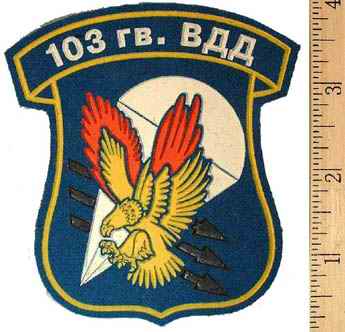