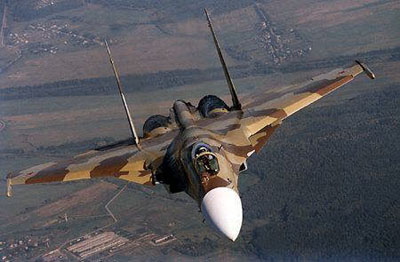 The Su-37 is a super-maneuverable thrust vectoring fighter derived from an Su-35 prototype. The Su-37 represents a new level of capability compared with the Su-27 and Su-35. The Su-37 test aircraft made its maiden flight in April 1996 from the Zhukovsky flight testing center near Moscow. This impressive single-seat all-weather counter-air fighter and ground attack aircraft, derived from the SU-27, has an updated airframe containing a high proportion of carbon-fibre and Al-Li alloy. The engines, avionics and armaments are also improvements on those originally installed in the SU-27. The AL-37FU engines are configured for thrust vector control, with the axisymmetric steerable thrust vector control nozzle is fixed on a circular turning unit. The steel nozzle in the experimental engines is replaced in production engines by titanium units to reduce the weight of the nozzle. The nozzle only moves in the pitch axis, and the nozzles on the two engines can deflect together or differentially to achieve the desired thrust vector for a particular maneuver...learn more. 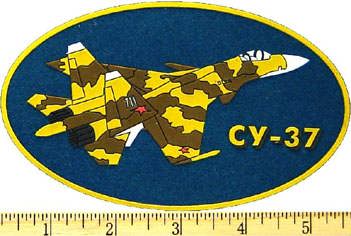