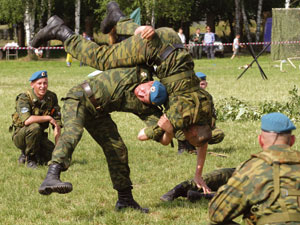 345 Airborne Regiment was formed in June of 1946 on the basis of one of the oldest regiments in the Red Army - the 345 Guards Shooting Regiment. This regiment was active during the Russian war in the Afghanistan. It started of it's duty there under disguise of technical engineers that were servicing the airport in the Kabul and Bagram ...learn more.