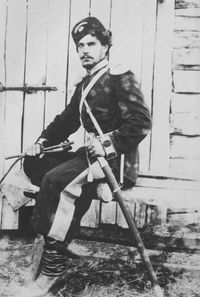 The Orenburg Cossack Host, a part of the Cossack population in pre-revolutionary Russia, located in the Orenburg province (today's Orenburg Oblast, part of the Chelyabinsk Oblast and Bashkortostan).After having constructed fortifications around the future town of Orenburg in 1734, they officially founded it in 1735. For the purpose of defending the city and colonizing the region, The Russian government relocated the Cossacks from Ufa, Iset, Samara and other places and created the Orenburg non-regular corps in 1748. In 1755, a part of it was transformed into the Orenburg Cossack Host (or Voisko) with 2,000 men...learn more.