Sleeve patch for Spetsnaz of the Interior Troops of the Ministry of the Internal Affairs of Russia.

Spetnaz MVD includes 16 Interior Troops (Russian National Guard) units, which are of good quality and intended for use to combat insurgency and for counter-terrorism purposes. These units usually have a unique name and official OSN number. They are generally well-trained and equipped, being far superior to the regular Russian infantry that is believed to be poorly trained as of 2004. For example, it is claimed that the unit "Rus" had fought successfully against the insurgents in Chechnya with a casualty ratio of approximately 1 to 200. Their missions may includes reconnaissance missions and regular combat operations (mostly house-to-house CQB assaults). They (especially "Vitjaz") have sometimes served as the back-up team during the counter-terrorist operations by team "Alpha". The parallel between them and the U.S. Army Rangers and the 1st SFOD-D (aka "Delta Force") is apparent....learn more . 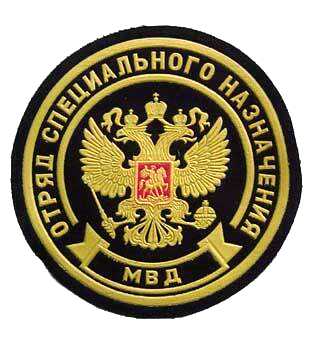