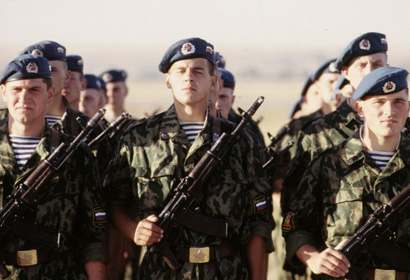 The Russian Airborne Troops or VDV is an arm of service of the Armed Forces of the Russian Federation, on a par with the Strategic Rocket Forces and the Space Troops. The Airborne Troops are the most capable mobile assault forces of Russia, as they are airborne forces in the first place.
Originally formed in the Soviet Union during the mid 1930s, they were massively expanded during World War II, where they formed up to ten Airborne Corps with numerous Independent Airborne Brigades, with most or all achieving "Guards" status. One of the new units was the 100th Airborne Division. At the end of the war they were reconstituted as Guards Rifle Divisions. They were later rebuilt and eventually formed seven Air Assault Divisions. With the demise of the Soviet Union, the number of VDV divisions has shrunk from seven to four, as well as one brigade.