The Double-Headed Russian State Imperial Eagle insignia, as on national emblem of the Russian Federation.
The Double-headed Eagle was adopted as a Russian Emblem in 1497 by Tsar Ivan III.
This Eagle, facing both East and West, was an old Byzantine Emblem of Roman origin. On the eagle breast ancient Moscow state symbol: St. George slaying The Dragon....learn more
Manufactured in Russia during 1990s.
Dimensions: 2.5 x 2.5 inches (60mm x 60mm) 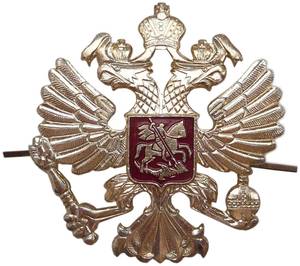